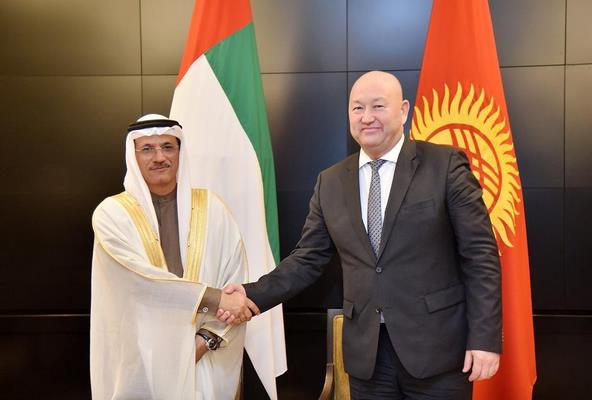 Bishkek hosts the first Joint Economic Committee between the UAE and Kyrgyz Republic
March 16, 2019
Bishkek hosts the first Joint Economic Committee between the UAE and Kyrgyz Republic
Respective delegations identified a wide array of vital sectors to enhance economic and trade cooperation and establish investment and development projects
The first Joint Economic Committee (JEC) between the United Arab Emirates (UAE) and the Kyrgyz Republic was held in the Kyrgyz capital, Bishkek. The meeting was chaired by H.E. Eng. Sultan bin Saeed Al Mansoori, UAE Minister of Economy, and Ganish Izakov, Deputy Prime Minister of Kyrgyzstan, during which the Committee identified numerous programs and strategies to strengthen cooperation framework in vital sectors including trade, investment, Halal industry, financial services, industrial cooperation, SMEs, innovation, information technology, agriculture, livestock, transportation, civil aviation, tourism, education and renewable energy.
The meeting marks significant progress as the two countries explore joint efforts to enhance economic and trade cooperation, discuss partnerships, and establish investment and development projects in various sectors of mutual interest. Discussions between the two countries also included establishing a structure for cooperation between the cities of Bishkek and Dubai, as well as collaboration in the development of the free economic zone in the province of Narin, which is located on the Kyrgyz border and presents an avenue to European and Asian markets.
The UAE's delegation included Mohammad Hareb Al Muhairbi, UAE Non-resident Ambassador to Kyrgyz Republic, and H.E. Eng. Mohammed bin Abdul Aziz Al Shehhi, Undersecretary of Economic Affairs in the Ministry of Economy; whilst the Kyrgyz Republic's delegation included several senior government officials.
H.E. Al Mansoori said that the work of the first session of the JEC between the two friendly countries represented a pivotal step forward in the bilateral cooperation process and was a testament to the determination of the respective leaderships to elevate bilateral and economic relations to higher levels.
He pointed out that the increase in the volume of trade exchange is one of the priorities of cooperation during the next phase. Despite the jump in the growth rates of trade exchange between the two countries, which rose by 207 percent between 2012-2017, the volume of non-oil foreign trade is still modest and does not reflect the shared aspirations and potential of both sides. The total volume of non-oil foreign trade during 2017 was about USD 310 million.
H.E Al Mansoori also reviewed the country's leading economic and trade policies which are open, flexible and effective with linking various international markets. He pointed out that the UAE economy is one of the most diversified economies in the region and that non-oil sectors contribute more than 70.5 percent of GDP – which will exceed 80 percent in the coming years.
He said: "Supporting and developing sustainable and value-added sectors is one of our economic priorities. Our vision is to build a diversified and sustainable economy based on knowledge, innovation and technology with global competitiveness and high production capacity, in line with the UAE Vision 2021. The government is also working on policies and initiatives that serve long-term future development efforts, drawn from the tracks set by the UAE Centennial 2071."
H.E Al Mansoori also reviewed the UAE's efforts to provide an ideal business and investment environment for its partners through the adoption of investor-friendly policies that offer a wide range of incentives to support business growth.
For his part, Deputy Prime Minister Ganish Izakov emphasized the importance of the bilateral relations enjoyed by the two friendly countries, the mutual willingness to raise the prospects of bilateral cooperation to levels that meet the aspirations and ambitions of both sides, and the Kyrgyz government's desire to enhance the presence of UAE investments in its markets and establish partnerships in a number of development sectors that serve the common interests and achieve mutual benefit.
The Kyrgyz delegation urged UAE companies and investment funds to explore the opportunities offered by economic projects planned within the strategy of national development of the Kyrgyz Republic. The agenda of the committee also included discussing opportunities for cooperation in the fields of Islamic economy and Islamic banking.
Share this article
« Back