UAE launches ′′ Fifty Projects ′′ as a foundation for the future 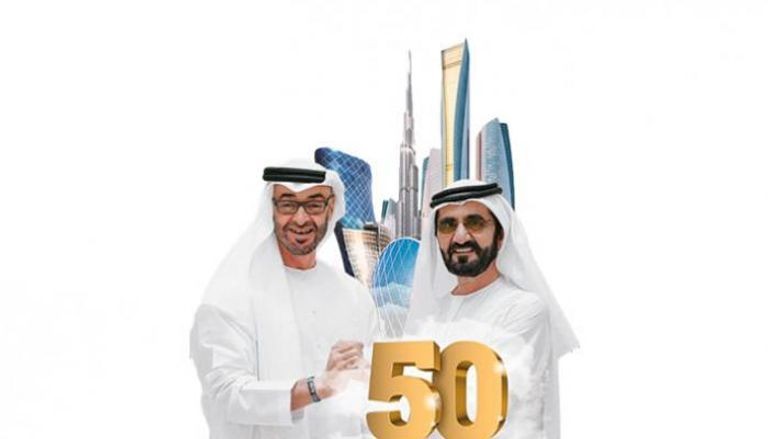 The "# Fifty _ Projects ′′ of the UAE launched by His Highness Sheikh #Mohamed _ bin _ Rashid Al Maktoum, Deputy Prime Minister, Prime Minister, Governor of Dubai, ′′ May God bless him ", and His Highness Sheikh #Mohamed _ bin _ Zayed Al Nahyan, Crown Prince of Abu Dhabi, the Deputy Supreme Commander of the Armed Forces, with the beginning of the new government season an important turning point in the history of the #Emirates, not only because of its size and diversity, but also because it is It establishes a new stage in the state march and strengthens the vital benefits of the state's economy from its position as a modern state that is already competitive and first positions in different fields globally.
The United Arab Emirates focused on developing economic diversification policies as a read of future transformations led to re-employment of wealth and resources, and to prepare the environment for #sustainable development, under the UAE's goals of upgrading life and welfare.
This connotation did not come from a vacuum, nor did it fall within the framework of wishes, nor even expectations, but rather it is a reflection of reality and data; the unprecedented achievements of the state over the past years of its age, which came according to a vision drawn by the Founding Fathers ′′ May Allah bless them ". And in accordance with the guidance of His Highness Sheikh #Khalifa _ bin _ Zayed _ Al _ Nahyan, the president of ′′ May Allah protect him ′′ the UAE continues the march of goodness and construction to confirm that it is a building and reconstruction country at home and abroad Our future vision towards sustainable development translates into a global model, economically diversified, through initiatives, strategies and actions launched and adopted, to enhance the contribution of all sectors to economic prosperity, as well as oil contributions. Its various industries, based on the biggest Emirati national strategy aimed at preparing all its vital sectors for the post-oil phase, as well as decisions of the National Agenda 2021, and the Emirates 2071, to devote and firm #diversity _ Economic, what that means on different levels of life.
The ′′ Fifty Projects ′′ reviews the investment benefits of all sectors of the state, enhancing the desire of investors, talented and entrepreneurs to invest in these sectors in a safe and vibrant environment and the financial yield of these investments, In addition to the ability of the Emirates to provide an incubative environment for all new investment patterns, specifically in promising sectors such as space industries, what is related to the fourth industrial revolution, technology industries, etc. in a forward foreseeing the future ahead of transformations in the global economy.
Furthermore, there are other projects that include the's project packages covering all the vital sectors of the state including education, health, culture, sports, community values, science, technology and other sectors that will contribute to Making qualitative leaps in the national economy, and achieving the goal of all the human development goals in the state is to ensure a decent life for all members of society citizens and residents; so that the Emirates remains the best place to live and intended for people from different parts of the world; not just because Security, stability or prosperity, but also tolerance and openness.
The first package of projects comes to confirm that the state is steadfastly moving towards leadership in different fields and enhancing its global position; the th document which contains the strategic path of the state in key economic, development and social areas is embodied through principles The ten countries that build the state's ambition and strategic vision aimed at becoming the United Arab Emirates by the th anniversary of its founding the best countries in the fields, including due to:
First :- Ambitious and diverse projects targeting citizens and residents strengthen unique community cohesion and strengthen the power of the Union which prepares the Umbrella; it is the primary engine not only of national feelings, but also of giving, giving and giving everything It would serve this country and make it a role model in the region and beyond.
Secondly :- Economic projects aimed at opening new markets are important for developing domestic industries and developing state exports; meanwhile, they open up great foreign and local investment opportunities and make the UAE a competitive country, boosting its engagement and of course its position. Its role in the world economy; this trend is linked to the future foreign policy perspective of the state; its role exceeds political, diplomatic or security issues, to be an uplifter and even a servant of the economy; this is all positively reflected on the level of people's lives and welfare Their love is the first goal of all policies.
Thirdly :- The state is keen to take into account the environment, and to show how much the state takes responsibility towards the planet and the real dangers it has that call for all states to sacrifice to save and protect human life on it; therefore Developing a positive relationship with the environment will be a key priority even in the state's foreign policy.
Share this article
« Back