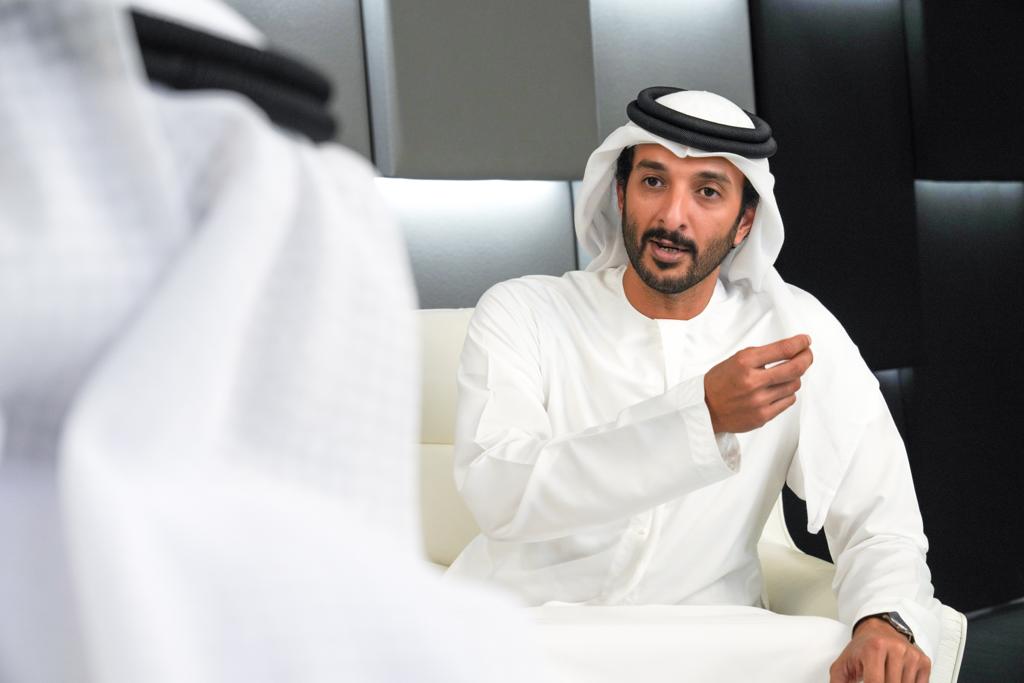 Abdullah bin Touq Al Marri, Minister of Economy, has said the speech of President His Highness Sheikh Mohamed bin Zayed Al Nahyan has outlined the strategic direction for the economic development in the UAE by promoting openness to the world and consolidating the principles of cooperation based on respecting common interests, achieving mutual benefit, and enhancing the resilience and sustainability of the national economy, with the participation of the private sector.

In an exclusive interview, Al Marri told the Emirates News Agency (WAM) that foreign trade is a major tributary to the national economy and one of the pillars of its strength and competitiveness, as the UAE has huge maritime, air and land networks linking it with more than 400 major cities around the world.

He added that the UAE is a role model in dealing with the repercussions of the COVID-19 pandemic, as the country has proven a high ability to achieve balanced management between health and economic issues.

The Minister of Economy pointed out that commodity price hikes are a global challenge and that the Ministry has well-studied policies and plans to contain any unjustified increases in the country's markets.

Following is the full text of the interview:

Q1: His Highness Sheikh Mohamed bin Zayed's speech highlighted the strategic importance of the UAE's economy. What are the Ministry's plans to translate His Highness' speech in a way that enhances the UAE's global stature? A: His Highness Sheikh Mohamed bin Zayed laid the foundation for continuing the UAE's leadership regionally and internationally. His speech reiterated the UAE's consistent approach to adopting a development and humanitarian model that puts the needs of the country's citizens foremost and provides all residents with the best environment to live and work.

His Highness has laid down the strategic directions for the country's economic development during the next phase by enhancing openness to the world and consolidating the principles of cooperation based on respect for common interests and achieving mutual benefit and emphasising the importance of the private sector as a significant partner in the development process.

The Ministry of Economy, in cooperation with all its partners, in accordance with the vision of the UAE President, continues its efforts to develop the best system of economic legislation that keeps pace with the future and works to stimulate new business models related to the sectors of the new economy.

Q2: The President recently said that the economy is the best way to achieve peace and prosperity; thus, the UAE signed three comprehensive economic partnership agreements. What is the expected economic return for the agreements, and what are your plans to boost foreign partnerships? A: Foreign trade is a major tributary to the national economy and one of the pillars of its strength and competitiveness, as the UAE has vast maritime, air and land networks linking it with more than 400 major cities around the world. This makes it a major commercial hub and regional logistics centre.

This outstanding position is translated by the foreign trade figures, which witnessed a growth of up to 27% during 2021 compared to 2020 and about 11% compared to the pre-pandemic levels of 2019 with a value of nearly AED1.9 trillion.

The Comprehensive Economic Partnership Agreements (CEPAs) programme - which was announced as part of the "Projects of the 50" last September - is an important pillar of the UAE's endeavours to stimulate sustainable economic growth.

Three agreements were concluded with India, Israel and Indonesia and great progress was made in negotiations to sign more agreements with other countries during the coming period.

The three signed agreements open up markets for more than 1.6 billion consumers around the world. In light of the opportunities offered by these agreements, it is expected that they will lead to an addition of up to $16 billion in the country’s GDP over the next ten years and an increase in UAE exports to those markets with a value exceeding $10 billion during the same period. Moreover, it is expected to introduce about 190,000 job opportunities, including highly qualified, talented and skilled people.

Q3: The world faced multiple economic challenges during the COVID-19 pandemic. How did the national economy accomplish the economic recovery plan and what are your expectations for growth levels during 2022? A: The UAE is a role model in dealing with the repercussions of the COVID-19 pandemic, as the country has proven a high ability to achieve balanced management between health and economic issues.

The Central Bank of the UAE also raised the growth forecast for the national economy to 5.4% in 2022. This highlights a number of factors, including the country's ability to manage the global pandemic, the easing of restrictions on economic sectors, and the recovery in oil prices.

This is attributed to the changes in the legislative environment related to the development and stimulation of business and economic activities, which were based on promoting economic openness policies through amendments to the Commercial Companies Law, which brought about a qualitative leap in the investment environment in the country.

Q4: Where does the tourism sector stand on the strategic map of the Ministry of Economy? What are the key indicators that reflect the development of this key sector? A: The tourism sector succeeded in achieving positive results, supported by Expo 2020 Dubai, which attracted more than 24 million visitors over six months, in addition to the World's Coolest Winter campaign.

The contribution of internal tourism to the national economy accounted for 23 percent of total tourism revenues while international tourism contributed 77 percent, according to figures in 2019. Under this framework, the UAE's internal tourism strategy was launched in 2020 and aimed at increasing the number of local tourists.

The sector's figures for 2021 were positive, as hotel establishments attracted 19 million visitors, an increase of over 29 percent compared to 2020 while internal tourism accounted for 58 percent of the total number of visitors, and 42 percent were from outside the country.

In 2021, hotel establishments recorded revenues worth AED28 billion, achieving a growth of more than 70 percent compared to 2020.

Hotel establishments recorded revenues worth AED11 billion in H1 2022, a rise of 20 percent compared to the same period in 2019.

Q5: The world is facing the global challenges of price rises and inflation. What are your plans for addressing these potential challenges? A: The Ministry of Economy is handling this issue by trying to achieve a balance between the consumer’s interest in obtaining goods at reasonable prices on the one hand, and ensuring the sustainability of supplies and the availability of goods in markets on the other as maintaining supplies is a national priority that serves the country’s food security policies.

The Ministry of Economy cooperates with local economic departments and chambers of commerce, as well as relevant partners from the private sector who supply various commodities, basic consumer products and materials that enter the production process, in order to study the global price rises of these materials and work together to limit the impact of any global price increases in those commodities on the final products sold in the country's markets.

Strengthening the UAE’s consumer protection system and drafting relevant policies are national priorities, and we are working through the ministry and the Supreme Committee for Consumer Protection to implement them, in order to ensure sound commercial practices in local markets, maintain the availability and diversity of basic commodities in quantities that meet the needs of citizens and residents of the country and increase strategic stocks.

Q6: The UAE has an attractive economic and legislative environment. What are the best policies being drafted by the ministry to attract local and foreign investments? The Ministry of Economy oversees over 20 laws related to the economy and business environment, including laws covering companies, small and medium enterprises (SMEs), cooperatives, commercial agencies, strategic inventories, competition, anti-dumping, commercial transactions, e-commerce, consumer protection and auditors, and countering money laundering crimes, as well as related intellectual property laws.

The ministry is also currently finalising a new law on family businesses.

The UAE is a leading destination for family businesses in the region, as it has the best and most competitive business environment among the region’s countries, in light of the signing of economic and trade partnership agreements that enable it to access various global markets.

The recent amendments to laws related to the protection of intellectual property rights, copyrights, industrial property rights and trademarks have contributed to the growth of creative industries, created opportunities for the creative economy, and attracted new investments in this vital field.

Q7: What does the New Global Economy concept mean to the UAE? A: During the COVID-19 pandemic, we found that the most affected economies were those based on traditional economic sectors.

One of the main factors that served the UAE’s efforts to address the global repercussions of the COVID-19 pandemic is the fact that it has an advanced digital and technological infrastructure, and today, we are continuing this trend by building capabilities in new economic sectors based on digital technologies and virtual technologies, as well as renewable energy, space and the Fourth Industrial Revolution.

The country has made significant progress in creating a supportive environment that will benefit from the economic opportunities provided by new economic sectors, including the circular economy, through drafting 22 new policies that facilitate the national implementation of a circular economy.

Furthermore, the UAE Government launched the Investopia initiative, which is a global initiative that aims to highlight investment opportunities in future sectors.

It also organised dialogue sessions in India and Morocco to discuss opportunities in these markets.