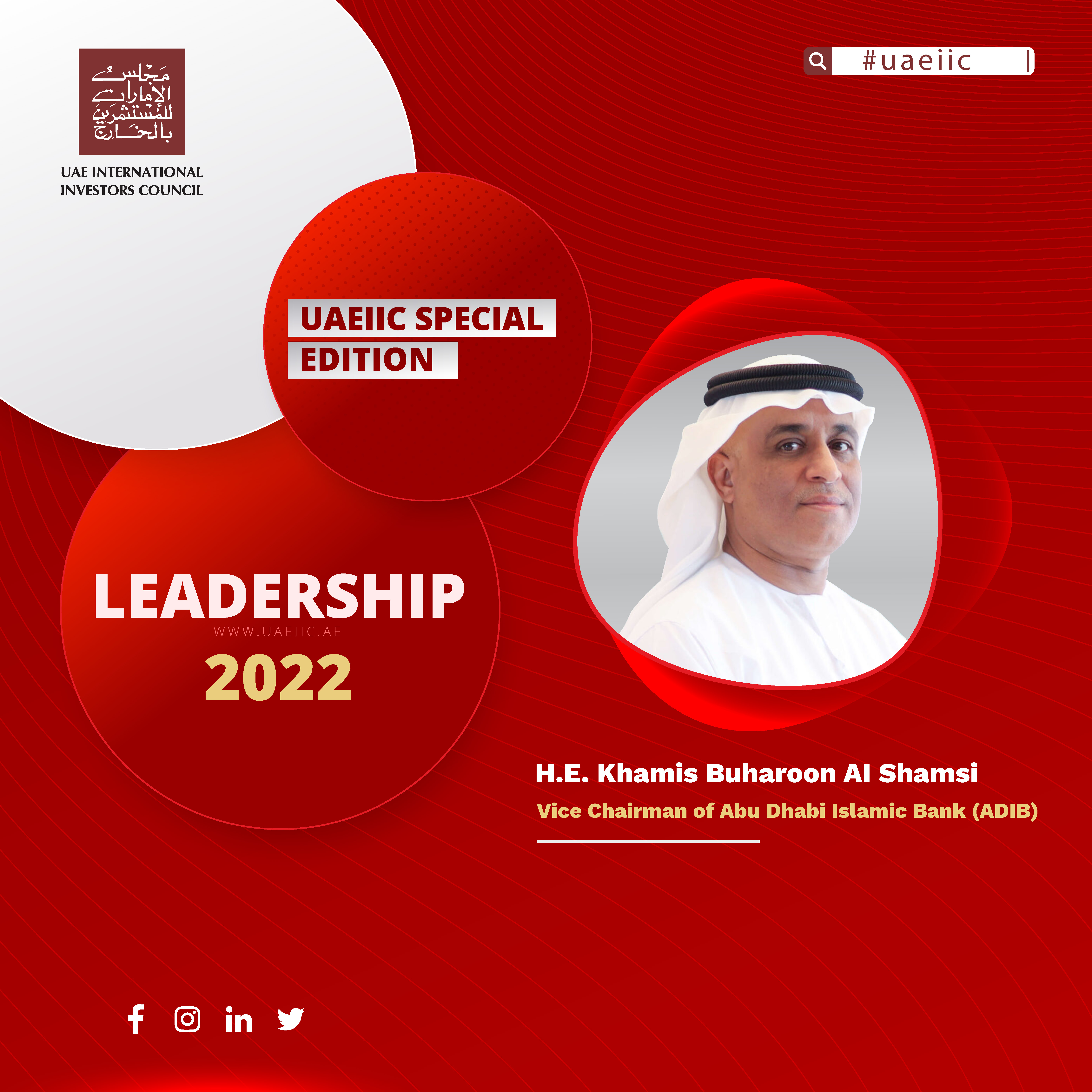 UAE International Investors Council - UAEIIC SPECIAL EDITION LEADERSHIP 2022
H.E. Khamis Buharoon AI Shamsi, Vice Chairman of Abu Dhabi Islamic Bank (ADIB)
His Excellency Khamis Buharoon AI Shamsi, runs a banking consultancy advisory service.
H.E. Buharoon AI Shamsi spent 14 years at Abu Dhabi Islamic Bank, from 2007 to March 2021.
During this time, he held many roles including managing director, member of the board of directors, vice-chairman of the board of directors, and acting CEO for two years. As well as served a the Chairman of Board of Directors For Burooj Real estate and He most recently served as the Vice Chairman of Abu Dhabi Islamic Bank.
H.E. Khamis Buharoon has over 36 years of experience in banking, having acted as CEO, manager, and chairman of Several boards, and has successfully led teams as the head of the settlements committee, member of the executive committee, and vice-chairman of the nominations and remuneration committee, among many other positions.
Before his time at Abu Dhabi Islamic Bank, Buharoon served as CEO of Commercial Bank International for two years, during which he contributed to the restructuring of the bank.
His work at Commercial Bank International included acting as managing director for Commercial Bank financial Brokerage, as well as managing director for Takamul Real Estate.
He was also the Chairman of the National Development Bank in Egypt since ADIB’s acquisition of the Bank in the final quarter of 2007 and Chairman of the Board of Directors of Abu Dhabi Financial Brokerage Company.
He had also served as the Head of Domestic Banking Division at the National bank of Abu Dhabi – NBAD for 7 years and served as the Chairman of the Board of Directors of Abu Dhabi Leasing Company.
Buharoon is a certified public accountant and auditor. He served as head of the Banks Inspection Team, Assistant Director of Internal Audit and Head of the Financial & Administrative Affairs Department with the UAE Central Bank for 11 years.
H.E. Buharoon contributed in establishing several investment companies such as Arqaam Capital Investment in DIFC, UBL and served as a board member in Tharawat Investment House in the Kingdom of Bahrain, Naeem Holdings in Egypt and Unifund Capital Financial Investment in the UAE from 2009 to 2017 and the Chairman of Etihad Capital in the UAE.
H.E. Buharoon Al Shamsi is a sought-after advisor, having sat as a board member and as a chairman of committees including the Audit Committee at Agthia, he is the chairman at the Abu Dhabi National Takaful Company’s board of directors, among others. He has also served as a member on many boards and executive committees in UAE, Dubai, Egypt, and London, among others.
H.E. Khamis Buharoon was born in the United Arab Emirates in 1964, and he has a B.A in Business and Accounting and he attended many programs and training courses globally.
Share this article
« Back