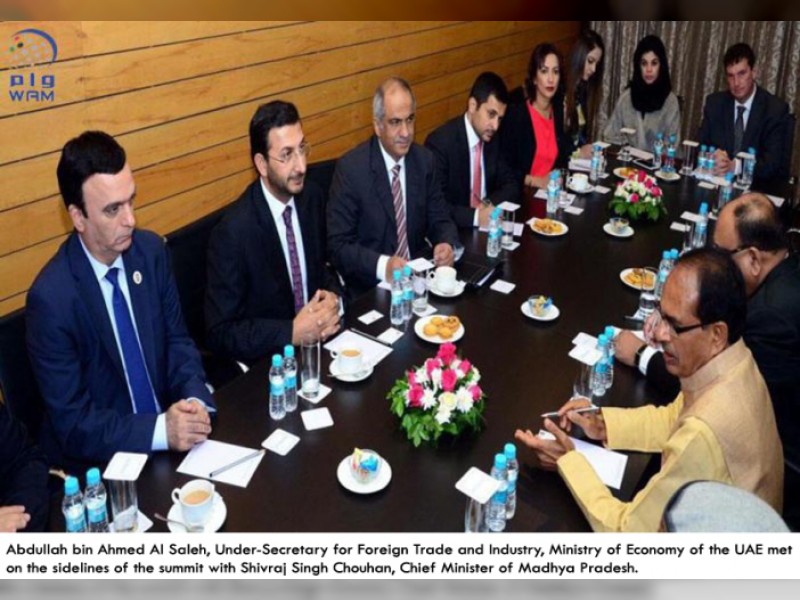 UAE participates in Global Investors Summit in India
The UAE is the largest Arab investor in India, with total investments exceeding US$10 billion, in addition to US$4 billion worth of direct investments, which is equivalent of 85 percent of the total Arab investments in India, according to a top official of the ministry of economy of the UAE.
"India accounts for about 9.8 percent of the UAE’s total non-oil foreign trade, and volume of trade between the two countries amounted to US$50 billion in 2015-2016, which is expected to reach record levels," said Abdullah bin Ahmed Al Saleh, Under-Secretary for Foreign Trade and Industry, Ministry of Economy of the UAE.
Speaking at the opening of the Global Investors Summit, in Madhya Pradesh, central India, he said, "India is the largest importer of goods from the UAE, with goods from the country being exported to the subcontinent nation hitting about 14.9 percent of the UAE’s total exports and 8.7 percent for re-exports, making India the second largest export market for the country."
The event was attended by government delegations from the state of Madhya Pradesh, including top-level officials and guests from institutions, government departments and representatives from the private sector.
The summit also organised a series of seminars and panel discussions, looking for ways to promote joint investments in agriculture and food industries, technological innovation and clean energy cars, pharmaceuticals, textile, tourism and energy.
Al Saleh highlighted that the exceptional bilateral cooperation between UAE and India in aviation creates a strong push for trade and tourism exchange as the number of weekly flights between the two countries have exceeded the 1,000 weekly flights.
On the sidelines of the summit, Al Saleh met with Shivraj Singh Chouhan, Chief Minister of Madhya Pradesh, where both parties discussed several economic, trade and investment opportunities, particularly in the areas of smart cities, food industries, tourism, information technology and textile.
He also met with Chandrajit Banerjee, Director General of the Confederation of Indian Industry, CII, and exchanged ways to promote industrial investments and benefit from the resources, capabilities and facilities available to both parties in this area. UAE Ambassador to India, Dr. Ahmed Abdul Rahman Al-Banna attended the meeting.
There was a panel discussion solely for the UAE to showcase opportunities in the country’s trade and investment for Indian investors and other participating countries.
Ambassador Al-Banna commented that the UAE-India relations indicate promising prospects for growth that would further strengthen bilateral ties at all levels. He expressed his appreciation for the selection of the UAE as a partner among the top global investors.
The UAE delegation included Jamal Saif Al Jarwan, Secretary General of the UAE International Investors Council; Mana Mohammed Saeed Al Mulla, CEO of Khalifa Industrial Zone (Kizad); Sharif Habib al-Awadhi, Director-General of the Fujairah Free Zone Authority; Fatima Houdrom Al Ghafli, Member of Board of Directors of the RAK Chamber of Commerce and Industry; Ayda Khouri, Director of the International Economic Promotion in the DED in Abu Dhabi; Tony Whitby, Air Arabia's Director of Network, Strategy and International Affairs; Mohamed Kamel Al Muaini, Founder of the International Relations and Cultural Diplomacy; Ahmad Sultan Al-Falahi, the Trade Attache for the UAE Embassy in India and Mohammed Nasser Hamdan Al Zaabi, Director of Trade Promotion and Investment Department at the Ministry.
Share this article
« Back