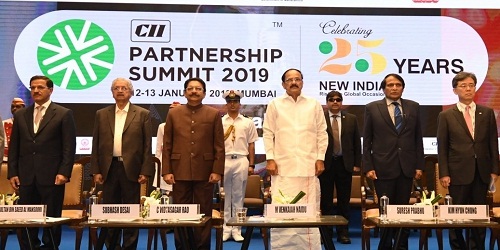 Minister of Economy to head UAE delegation at "Partnership Summit 2019" in India
H.E. Eng. Sultan bin Saeed Al Mansouri, Minister of Economy, will be heading a high-level economic delegation during an official visit to India, to participate in the "25th Partnership Summit 2019," which will be held in Mumbai on 12th and 13th January.
The UAE delegation will include Dr. Ahmed Abdul Rahman Al Banna, UAE Ambassador to India; Abdulla Al Saleh, Under-Secretary of the Ministry of Economy for Foreign Trade Affairs; Jamal Al Jarwan, Secretary-General of the UAE International Investors Council; Ahmed Mohammed Al Kaabi, Assistant Under-Secretary for Oil, Gas and Mineral Resources at the Ministry of Energy and Industry and the UAE Governor at OPEC; Marwan Al Sarkal, CEO of the Sharjah Investment and Development Authority, Shurooq; Sharif Habib Al Awadhi, Director-General of the Free Zone Authority of Fujairah; Mohammed Hamdan Nasser Al Zaabi, Director of the Commercial Promotion Administration at the Ministry of Economy; Dawood Al Shezawi, CEO of the Annual Investment Meeting, as well as senior officials from local and federal government authorities and senior businessmen.
The UAE is the partner country of the summit’s current edition, and will organise a session, titled, "The UAE-Indian Economic Partnership Towards Wider Prospects," which will highlight the economic and trade cooperation between the two countries and discuss relevant opportunities to strengthen the economic and investment partnerships between their public and private sectors.
Al Saleh said that the UAE is keen to participate in the summit, as it is a platform for discussing international economic developments and opportunities for cooperation, whether with regards to India or the rest of the world.
He added that the growing number of delegations that participated in the summit over its 24 previous editions reflects its success in gaining international attention.
He also highlighted the excellent overall relations between the UAE and India, which is based on historical, geographic and cultural ties while pointing out that India has maintained its stature as a major commercial partner of the UAE over the past five years, placing either first and second place on the list of the UAE’s commercial partners.
Share this article
« Back