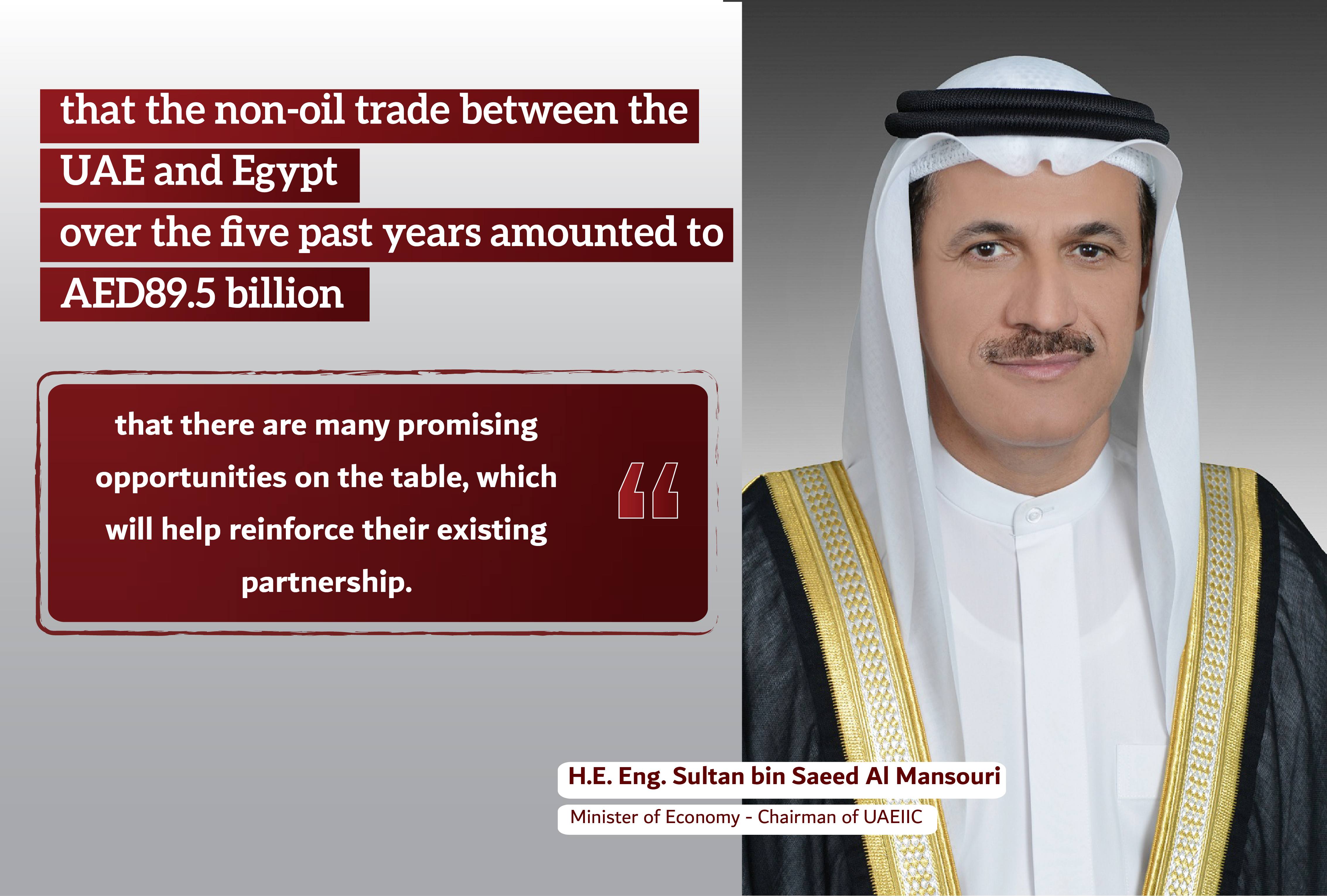 Non-oil trade between UAE, Egypt over past five years amounts to AED89.5 billion: Sultan Al Mansouri
H.E. Eng. Sultan bin Saeed Al Mansouri, Minister of Economy, said that the non-oil trade between the UAE and Egypt over the five past years amounted to AED89.5 billion.
Their non-oil trade exchange last year also amounted to AED20.1 billion, a 14.6 percent growth compared to 2017, when it reached AED17.6 billion, reflecting the strong overall strategic partnership between the two countries, he added.
on the occasion of the official visit of President of Egypt, Abdel Fattah El Sisi, to the UAE, Al Mansouri stressed that the UAE is ranked first globally in terms of investments in Egypt, with the total value of its foreign direct investments, FDI, amounting to AED24.3 billion, reflecting the activity of 990 Emirati companies that invested in Egypt at the end of 2018.
He added that Emirati investments in Egypt are in many vital sectors, including banking, telecommunications and information technology, real estate, oil, tourism, pharmaceuticals, agriculture, insurance, ports and aviation.
Egypt is ranked 28th globally in terms of investing in the UAE and is ranked seventh among Arab countries, with its total FDIs valued at AED3.3 billion at the end of 2018, he further added while pointing out that in 2017, Egyptian FDIs valued at AED2.5 billion accounted for 34 percent of the UAE’s economic growth.
Egyptian investments in the UAE are present in all economic sectors, most notably real estate, finance, insurance, construction, wholesale and retail commerce and the industrial sector, he noted.
Al Mansouri explained that bilateral non-oil trade between the two countries showed positive growth over the past five years, and their total non-oil trade exchange increased by 12.2 percent in 2018 compared to 2014, and 14.6 percent compared to 2017, stressing that Egypt is the UAE’s sixth-leading trading partner in the Arab Region and 21st in the world while the UAE is Egypt’s second-leading trading partner in the Arab region and tenth in the world.
Regarding future investment opportunities between the UAE and Egypt, in light of their convergence, the Ministry of Economy stated that there are many promising opportunities on the table, which will help reinforce their existing partnership.
Al Mansouri pointed out that the number of registered Egyptian trademarks in the UAE in November 2019 is 601 trademarks and 44 commercial agencies while the number of Egyptian companies with branches in the country is 111, and around 23,651 Egyptian partners own local licenses.
The UAE occupies the first place in the Arab region in terms of Egyptian exports, accounting for around AED7.3 billion or 21 percent of total Egyptian exports to Arab countries, he further said, noting that the number of flights by Emirati national carriers to Egypt is close to 80 per week, and the number of Egyptian visitors in the UAE in 2018 amounted to 612,600, or 2.4 percent of the total number in the country.
Al Mansouri then stressed that the bilateral cooperation agreements signed by the two countries have advanced to the level of an overall strategic partnership, noting that many Emirati and Egyptian institutions have signed over 18 agreements and memorandums of understanding, MoU, by November 2019 in various areas of political, economic and scientific cooperation, most notably the signing of the "Agreement on Liberalisation of Trade in Services among the Arab Countries" at the headquarters of the Arab League in Cairo.
The Emirates National Oil Company, ENOC, signed an agreement with the Egyptian General Petroleum Corporation to provide aircraft fuel supplies to all key airports in Egypt, which will also create FDI opportunities in the Egyptian market, he explained.
On 20th December, 2018, the UAE and Egypt signed a letter of intent to reinforce their cooperation in exchanging and sharing security information in civil aviation, as well as to enable Egypt to meet its obligations to protect the civil aviation system.
Share this article
« Back