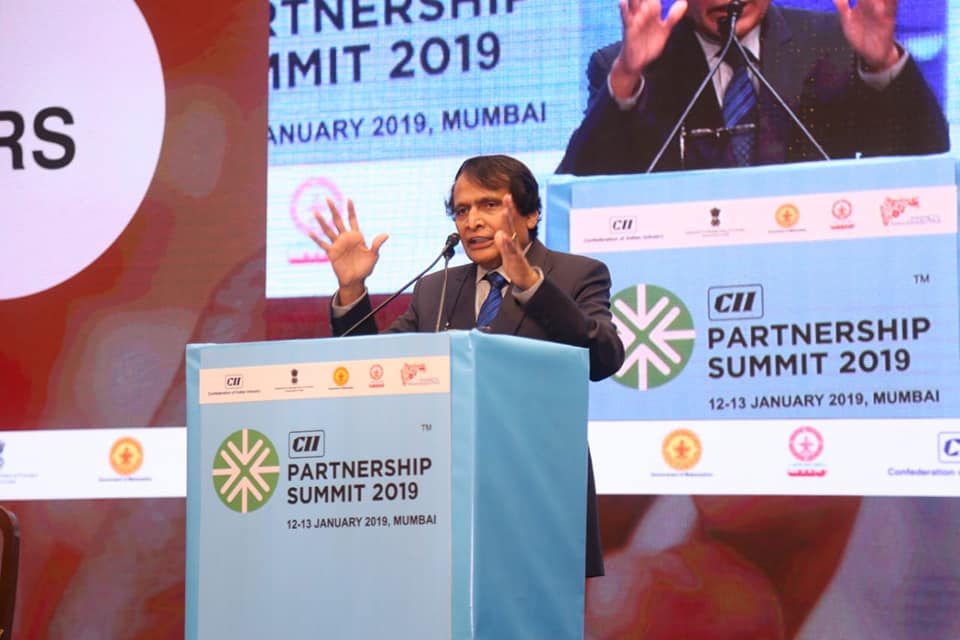 Grassroots to global: Prabhu sees great opportunity to make GDP $5 tn in 2025
Union Minister for Commerce & Industry and Civil Aviation Suresh Prabhu said at the 25th edition of the CII Partnership Summit, in Mumbai today that the Government of India’s strategy is from grassroots to global, manufacturing to services, agriculture to value-added and FDI to investment by India in other countries. He said that he sees great opportunity in India’s plans to take India’s GDP to $5 trillion in 2025 and India becoming a $ 10 trillion economy by 2035. As an example, he cited the joint efforts by India and South Korea towards developing a dynamic world trading platform. Over 1000 delegates from 40 countries are participating in the 2-day global summit titled ‘New India: Rising to Global Occasions’.
Prabhu said: “The government is targeting specific districts so that the district-level growth rate improves incrementally by 3% – 4%, resulting in corresponding improvements in the national growth rate. The commerce and industry ministry conducts an annual reform exercise, in collaboration with the World Bank, for the states and UTs under the Business Reform Action Plan (BRAP) to improve delivery of various Central Government regulatory functions and services in an efficient, effective and transparent manner. This exercise will now be undertaken at the district level with the participation of the states and UTs.”
The central government is preparing a development plan for each and every district so that growth is led from the district upwards, which will be a game-changer.
He informed that the government has come out with the first-ever Agricultural Export Policy to take its agricultural exports from $ 30 billion to $ 100 billion in the next few years. He said that India can work together with other nations where agricultural production happens under a quality control regime approved by the importing countries. This will integrate Indian farmers and high-quality agricultural products from the country with global value chains, as well as double its share in world agriculture exports.
He urged the states and UTs to make use of the Rs50 billion allotted for 12 champion services, which will lead to the creation of jobs in the services sector like IT & ITeS, accounting and financial services, tourism and hospitality services, medical value travel, transport and logistics services, audio-visual services, legal services, communication services, construction and related engineering services, environmental services, and education services. The Minister said that India got the highest ever FDI in 2018, which was higher than many of its neighboring countries.
The Vice President of India M. Venkaiah Naidu stated that reforms and steps taken by the Government of India to improve Ease of Doing Business will continue, since the mood of the people is in favor of growth and development, in line with the Prime Minister Narendra Modi’s mantra of “Reform, Perform and Transform”.
Share this article
« Back