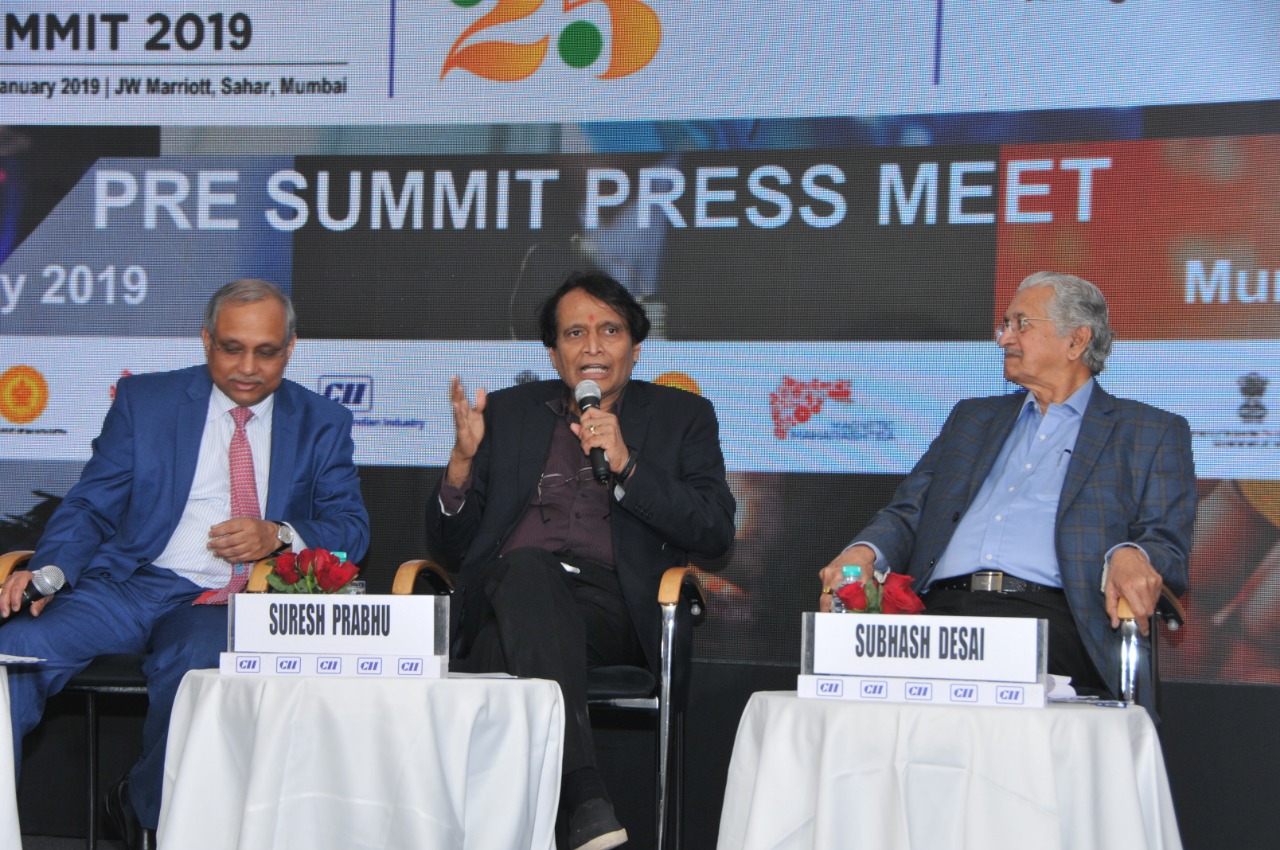 Vice President of India to inaugurate CII Partnership Summit in Mumbai: Commerce Minister
Ease of Doing Business Mapping and growth targeting being done for districts: Union Minister Shri Suresh Prabhu
Invest India given target to attract 100 billion dollars of FDI in the next two years: Commerce Minister
The Union Minister for Commerce & Industry and Civil Aviation, Shri Suresh Prabhu has said that the CII Partnership Summit is a flagship event of the Indian industry, which focuses on India as a whole. He noted that it is an important landmark that the summit is being held for the first time in Maharashtra, the most progressive state in the country. He said that the Vice President of India will inaugurate the 25th edition of the summit on January 12, 2019. The event is co-organized by the Government of India, Government of Maharashtra and Confederation of Indian Industry, said the Minister. He was addressing a joint press conference in Mumbai today, on the CII Partnership Summit, along with Minister for Industries & Mining, Govt of Maharashtra, Shri Subhash Desai and DG, CII, Mr. Chandrajit Banerjee. The Summit will be held in Mumbai on January 12 and 13, 2019. The Union Minister Shri Suresh Prabhu will be the Chair of the Summit and Shri Devendra Fadnavis, Chief Minister of Maharashtra – Chief Minister of the Host State - would be Guest of Honour at the Summit.
The Union Minister said that India has recorded the highest FDI this year, a figure higher than that of China. He said that Invest India has been given a target to attract 100 billion dollars of FDI in the next two years. Countries, sectors and specific companies are being targeted for this purpose, said the Minister. Companies that have an investible surplus and inclination to invest in India are being targeted for bringing in FDI. He said that the idea is that the 100 billion dollar investment mentioned above should go to those states which can absorb the investment. He stated that Maharashtra has the highest potential to get such investment.
Noting India’s improvement in the World Bank’s Ease of Doing Business rankings, the Minister said that the Government is coming out with a mapping of ease of doing business for each district of India. He said that Maharashtra will be one of the top destinations where district-level EoDB rankings would be improved. This initiative will go a long way in boosting investment, he added.
Shri Prabhu said that districts are being targeted to make incremental improvements in growth rate. He said that six districts in five different states have been selected for such targeting. Maharashtra is the only state where two districts have been selected. NACER and IIM have mapped the districts and strategy is being worked out for boosting the district growth rates, for inclusive growth.
The focus of the Partnership Summit is on policy, on bringing more investment into India and on better marketing India’s capabilities. He said that at a time of global slowdown, India remains a bright spot in the world economy. The Partnership Summit will showcase to the global and domestic industry the various initiatives being taken by the Government to accelerate India’s growth, said the Minister. He said that the summit will serve as a trigger to boost the growth of the Indian economy.
Minister Shri Subhash Desai thanked the Government of India for choosing Maharashtra as the host state for the summit. He also thanked CII for organizing the summit.
DG, CII, Mr. Chandrajit Banerjee said that 39 countries have confirmed participation in the summit. He said that the International Summit will have the participation of Heads of State and Government, Ministers, policymakers, CEOs, academicians and thought leaders from India and all over the world. The summit is intended to be a global platform for dialogue, debate, deliberation and engagement among Indian and global leaders on economic policy and growth trends in India.
*More on the Summit*
The theme for this year’s Summit is ‘New India: Rising to Global Occasions’.
Some of the topics under discussion at the Summit include: “Partnering with New India”, “Reforms and De-regulation – Strategies to Boost Investments”, “The Infra Expanse – a Super Imperative for Growth”, “The Inclusion Dynamics – A Digital Wireframe for All”, and “India: The New Global Address”, “Fostering an Innovation-driven Growth”, “Shaping the Future of Manufacturing: The Time is Now”, “Giving the Food and Agro sector the much-needed Impetus”, “Healthcare Development as a key component of a Growth Strategy”, “Tourism and Hospitality as a new Growth Driver”, “Defense and Aeronautics: Fulfilling the Country’s Industrial Ambitions and its Security Imperatives” and “Betting on a Leadership Role in Renewables”.
Some of the overseas dignitaries addressing the Summit include H.E. Stephan Kubiv, First Vice Prime Minister and Minister of Economic Development and Trade,
Share this article
« Back