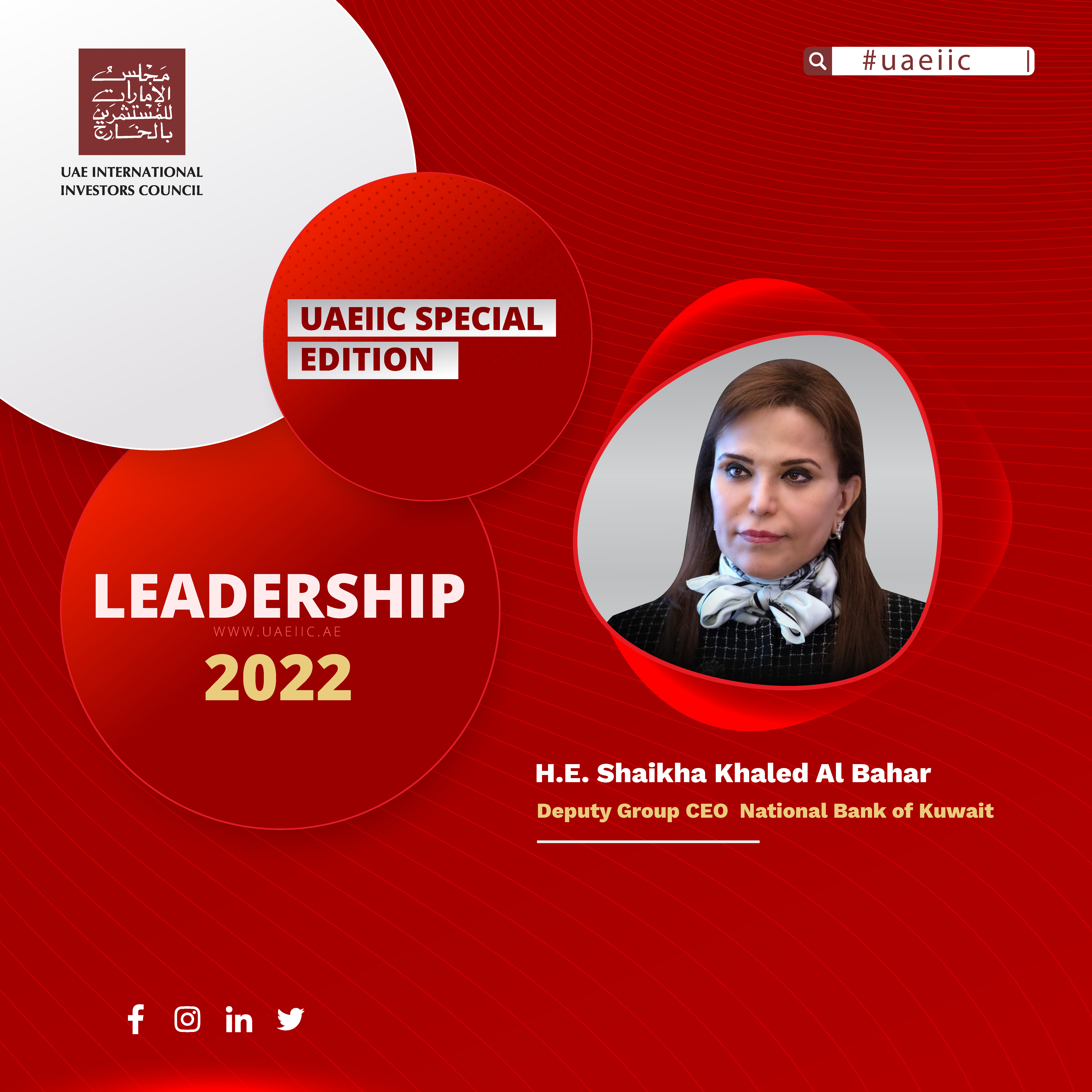 UAE International Investors Council - UAEIIC SPECIAL EDITION LEADERSHIP 2022
H.E. Shaikha Khaled Al Bahar, Deputy Group CEO  National Bank of Kuwait
Her Excellency Shaikha Khalid Ali Al Bahar currently holds the position of Deputy Group CEO for the National Bank of Kuwait Group (NBK), the leading financial institution in Kuwait and one of the largest in the Middle East. Prior to her current position, H.E. Mrs. Al Bahar led the Group’s Kuwait operations as NBK‐Kuwait CEO between 2010 and 2013, consistently contributing more than 70% of the Group’s profits.
In addition to being a member of most management committees at NBK Group, Mrs. Al Bahar is the Chairperson of National Bank of Kuwait France S.A. and National Bank of Kuwait (Egypt) and a Board Member of National Bank of Kuwait (International) P.L.C., the Group’s UK subsidiary.
Besides her NBK role, Mrs. Al Bahar was a member of Kuwait’s Supreme Council for Planning and Development for the years 2017 – 2021.
H.E. Mrs. Al Bahar is a proficient strategic leader with extensive experience in commercial and investment banking, as well as corporate banking and project finance.
Through her career, she played a key role in shaping the Group’s strategic vision and direction, including her role in leading NBK’s digital transformation strategy and launching Kuwait’s first digital bank.  Mrs. Al Bahar is a renowned banker who managed many landmark transactions on the sovereign and the institutional levels across the Middle East, turning the Group into a leading regional institution, operating in 13 countries, with total assets of USD 111.7 Billion and net profits of USD 1.2 Billion for the year 2021.
H.E. Mrs. Al Bahar has been celebrated over the years as a prominent Arab female figure and was regularly featured in various respectable rankings, including the world’s 100 most powerful Arab women by Forbes Middle East and Arabian Business. Mrs. Al Bahar is also a major advocate of sustainability in business practices and is always a key sponsor of NBK’s initiatives in the social and environmental space.
H.E. Mrs. Al Bahar holds a Bachelor degree majoring in international marketing with a minor in statistics. She also attended several executive management programs at reputable universities and business schools including Harvard, INSEAD, Wharton, Stanford, Duke as well as the National University of Singapore.
Share this article
« Back